Welcome to the very first Loudifier Saturday Morning Movie Review. Last weekend I finally hooked up my Xbox 360 to the intertron. Holy cow! There’s a lot of stuff out there in Xbox Live land. I stumbled across a live-action Halo movie, Forward Unto Dawn, and, like a UNSC cruiser sucked in by a Promethean gravity well, I didn’t have any choice but to watch it, and I decided I had to do a review. 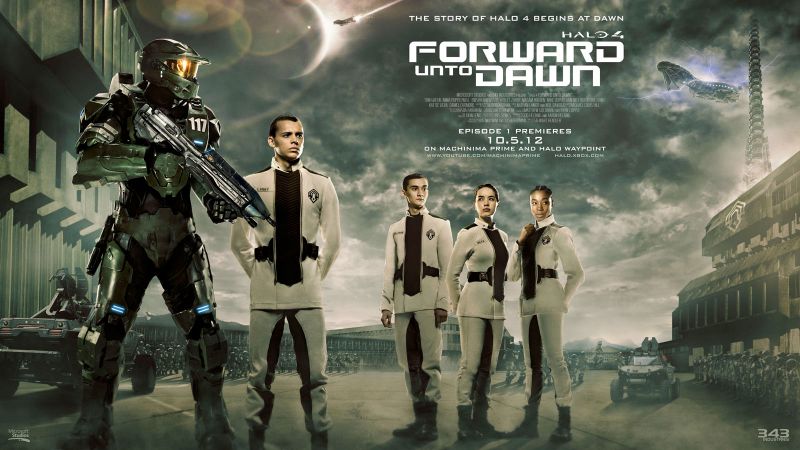 Forward Unto Dawn was a web series made as a promotion for Halo 4, designed to introduce the Halo universe to the uninitiated. After Halo 4’s release they took the five fifteen-minute episodes and squished them together to create a seamless feature-length (or at least almost feature-length) film. The funny thing is, if they had given the final movie a theatrical release it would have gone gangbusters at the box office. This is easily the best movie-based-on-a-video-game out there. However, you should take that statement with a large grain of salt; I actually kind of liked the Super Mario Bros. and Mortal Kombat movies.

The canon for the Halo universe falls into two major categories: games and books. The games give you the futuristic, fast-paced action, floaty physics and detailed, immersive settings that redefined the FPS genre when the original title was released. The books give you a window into the be-helmetted head of the Master Chief, and show you that underneath the half-ton of fusion-powered armor, John 117 is just a guy, trying to do his part to save humanity. Forward Unto Dawn falls very much on the book side of this division, although the action sequences manage to capture the feeling of the games.

If you have read The Fall of Reach, or Ghosts of Onyx, you will have seen this basic story already. Kid gets conscripted into the military, is subjected to training that pushes the limits of human endurance, brainwashed into zealotry against a merciless, mostly conceptual enemy, and then all hell breaks loose when something else attacks. The kid in this case is Cadet Thomas Lasky, son of the Grand Poobah of Something-or-Other in the UNSC. Tom is training at the Corbulo Academy of Military Science, which is like a ROTC on crack for the children of high-ranking UNSC officers. This is before the outbreak of the Human-Covenant war, so they play war games with other trainees, complete with cryogenic freezing, to train for battles with insurrectionists.

Tom doesn’t really buy into the whole “insurrectionists are evil and want to eat your brain” convictions that everyone around him has. Unfortunately, his almost-girlfriend is the person near him who is the most fervent in her hatred of the “innies”. Just as the Spartans did at the Reach training facility, he is struggling to keep his head above water with the brutal pace of his training, and is figuring out how work in a team and what it means to be devoted to a cause and to follow orders. And then the Covenant attack.

Cadet Lansky and some of his friends manage to survive, running and hiding from one of the Covenant’s iconic active-camouflaged energy-sword-wielding elites, until none other than the Master Chief himself shows up to save the day. The conversation that ensues is very reminiscent of the Chief saving a group of marines just before Reach is overwhelmed.

The special effects are pretty good, with excellent CGI. The loping movement of the elites, the badass energy swords, and the projectiles from Covenant needlers are particularly frightening.

The props, sets, and costuming are a cosplayer’s wet dream. The MA5B assault rifles are perfect, most of the sound effects are the same ones used in the games, and they built a warthog. An honest-to-god — sliding around corners, with wheels in the back that turn, and a chaingun on top of it — warthog.

The Chief’s armor is great, but I feel like the actor moved around a bit too much in it. He didn’t have the mechanical precision I would have expected from a cyborg of his pedigree, but that is really a small complaint, and is the only thing that doesn’t quite match the motion of the characters and enemies in the games. 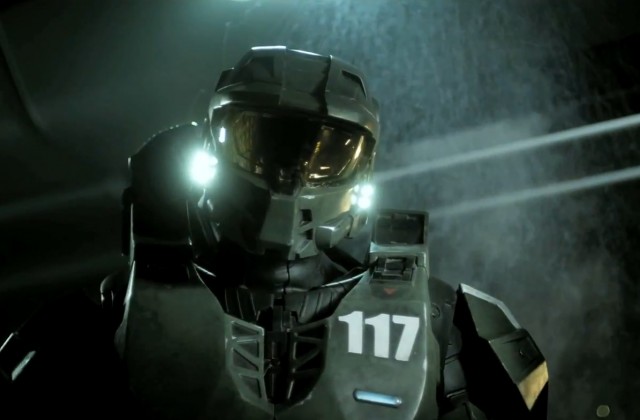 Without getting too spoileriffic, I will say that we don’t get to see the Master Chief’s face (of course), but we do get to see both Kelly and Fred. It turns out that Kelly’s face is… intense.

She’s kind of a bug-eyed freak with scars on her face and a million-mile stare. I have to give them credit for not just sticking some hot blonde in a space suit. It would have worked well with the target market for a movie like this, but it wouldn’t have really fit in context of the antisocial, asexual Spartans. Oh well, maybe Linda’s cute.

There are scenes where Cortana is rambling and yelling at herself, and threatening to kill the Chief, while he is frozen in a cryo tube and they are floating dead in space. For those who don’t know about Cortana being a “smart” AI, susceptible to rampancy, this won’t make any sense. This is important to the plot of Halo 4, so it is important when Forward Unto Dawn is used to promote Halo 4, but it doesn’t make much sense in the context of the events at the Corbulo Academy. It comes off as confusing and unnecessary, especially now that Halo 4 is out.

Overall, I am really surprised at the effort and attention to detail that was taken to make a silly web series as a promotion for a video game. The sets and action aren’t as grandiose as something like Transformers, but with less than a tenth of the budget, Forward Unto Dawn definitely comes close in production value. Considering how well this venture turned out, I would be shocked if Microsoft didn’t decide to bankroll an actual full-length film with a theatrical release to coincide with Halo 5.

Overall, I give Halo 4: Forward Unto Dawn four terrifying invisible elites with energy-swords hunting you down out of five. Yes, fan service abounds, but it is remarkable how well the creators of Forward Unto Dawn were able to craft a story that stands on its own, but still fits perfectly in the Halo universe.

With youngsters being trained in simulated battle to fight for the future of humanity, and a protagonist that is conflicted about his position and his responsibilities in the military, parallels must be drawn between this movie and the upcoming Ender’s Game. As a die-hard fan of both the Halo series and the Ender’s Game series, if Ender’s Game is half as good as Forward Unto Dawn, I will be thrilled.

Some of the images for this review came from halofanforlife.com. If you’re the graphic novel type, screenshots from the blu-ray have been adapted into a graphic novel for all five episodes, so head over and check it out.