Well that didn’t take long. First Mark Shuttleworth says we won’t be able to get all touchy-feely with Ubuntu until October, and then Canonical releases the Ubuntu Touch alpha for Nexus devices only, and then they host a full fledged port-a-thon. In what is the best display of underpromise and overdeliver I have seen in the tech world, Ubuntu Touch is actually out in the wild for over 25 devices.

I have to admit, after the ‘look with your eyes and not with your hands‘ first sighting of Ubuntu actually running on phone hardware, I was pretty skeptical of the emphasis and reliance on swiping and gestures as a replacement for the standard Android home, back and menu keys. After actually playing with it on my HTC Sensation via LaidbackNikez’ succinct guide over at XDA-Developers, those old buttons just feel like so much dead weight.

Please keep in mind that this is a very early look at Ubuntu Touch and that much (most?) of what you see here is not final. While the main interface is demonstrated fairly well, this build includes a lot of stubs of apps and other features. I am also testing on a non-Nexus device, which means almost none of the hardware is working except for the power button and the screen. As such, I cannot test camera features or anything that connects to the internet. I will avoid commenting on functionality as much as possible and try to assess the intent of the designers, instead of complaining about the keyboard not having autocorrect. 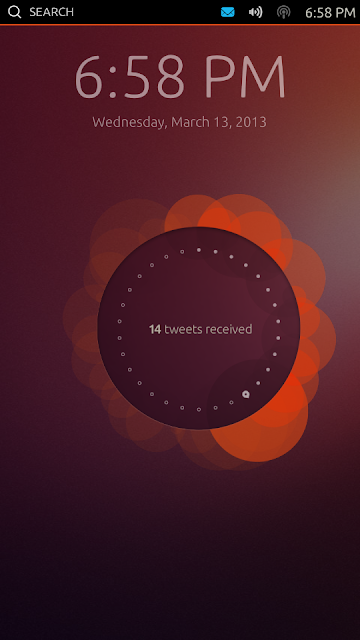 This is the lockscreen. At first you think, ‘Oh, it’s the Jelly Bean lockscreen. I’ll just swipe from the center of the circle out.’ Wrong. Swiping from right to left will sweep the lockscreen away to reveal the homescreen. Other than that, the lockscreen is pretty standard, except there doesn’t appear to be a quick shortcut for opening the camera and snapping a just-in-time pic. You actually can get to your camera from here, but that is through the left-to-right swipe Unity menu. More on that later. 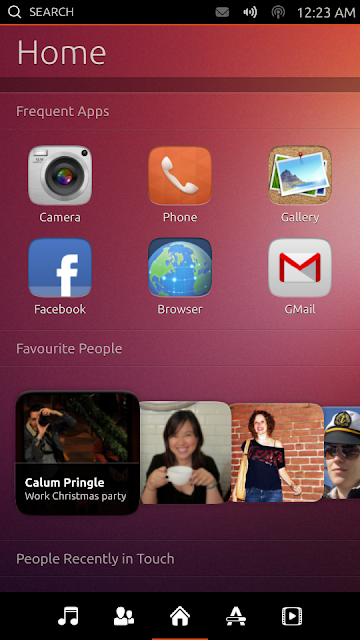 Does anyone else remember TouchFLO 3D? It was the early version of HTC’s Sense UI that ran on Windows Mobile devices waaaay back in the day. Ubuntu Touch’s homescreen(s) is what I imagine TouchFLO 3D would have grown into had Android never come onto the scene. Seriously, I’m pretty sure those icons at the bottom of the screen are the same ones I had on my Touch Pro 2. There is a home panel that shows your recently used apps, recent and favorite contacts, and a selection of recent and favorite media. 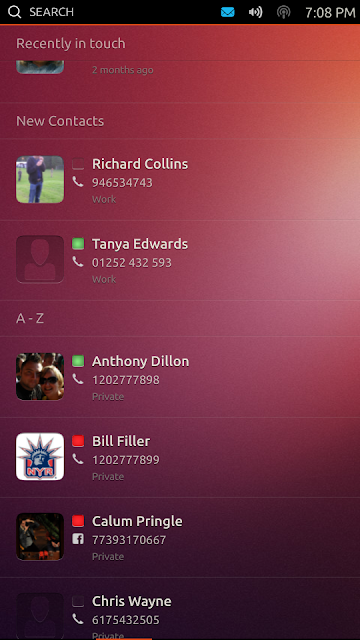 There is a people pane, that shows all of your contacts. It’s actually kind of refreshing to have an entire section of Ubuntu Touch’s homescreen devoted to contacts, rather than burying the contacts list in the app drawer or pages of icons, as iOS and Android do. This is a UI built for personal communication devices after all. 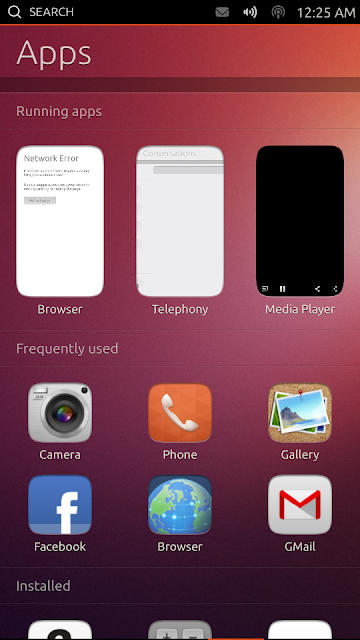 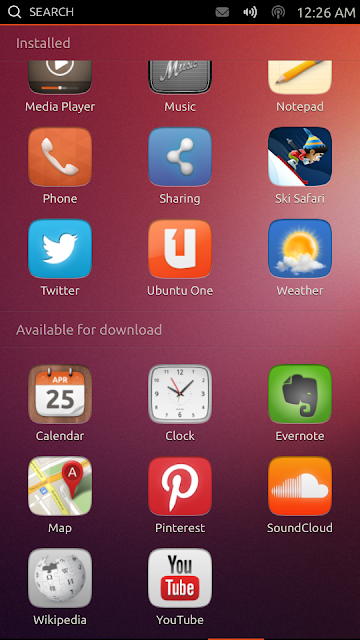 The Apps pane is very interesting. At the top it shows little previews of the apps that are currently running, followed by frequent apps, and then all apps. At the very bottom there is an interesting section called ‘Available for download’ that shows popular apps or maybe apps that are targeted at you based on your usage patterns and search history. This is either really cool or really creepy, depending on how it works and your point of view. There have already been concerns over Unity search being spyware that gives you targeted ads from Amazon. 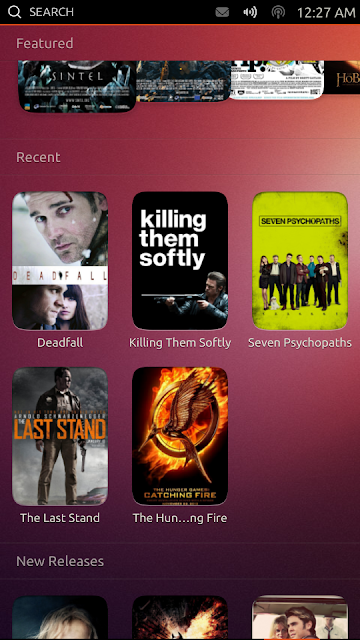 The music and video panes are on the far left and right ends of the homescreen, but they are almost identical in layout. The thing that I find odd is that the content seems to be exclusively from streaming sources. You have Featured, Recent, New Releases and Chart Topping/Popular Online. No mention of a library. This further supports the conspiracy theories of Canonical selling out the open source community to Amazon.

You can scroll horizontally through many of the elements on different panels, as well as scrolling up and down through the different sections of each panel. While this is very efficient with screen real-estate, situations arise where you will try to flip to the next panel, only to find yourself scrolling through your favorite contacts instead of going to the apps screen, for instance. While you can train yourself to only swipe in the title are at the top of the screen when you want to flip between panels, this still feels like a UI design issue that needs attention.

The philosophy of the Unity interface is clear in every panel. Here is your favorite stuff, then your recent stuff, then some stuff we think you might want (like ‘New Contacts’ in the People pane), and if you don’t see it right away, just swipe up to search for it.

Conspicuously absent till this point is the Unity bar that Ubuntu desktop users know and hate so well. It’s awesome. Full stop. Unity really does work on a touchscreen device, just like Canonical has been saying all along. It has taken them forever to prove it, but prove it they have. 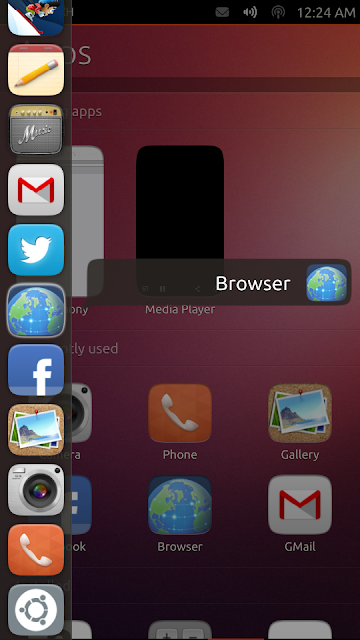 Swipe from the left edge of the screen in a little bit, and the Unity bar pops up, giving you a jump menu with a home button, quick access to your camera, phone, twitter or whatever, all without lifting your finger. Instead of lifting your finger over the app you want, swipe past the bar into the center of the screen to be taken to the homescreen. This mechanic is brilliant. Think about task switching in Android or iOS. You have to double click the home button or hold the home button until a menu pops up, then tap on your app of choice. In Ubuntu, that takes a single motion of your finger, and the “home” gesture is still as easy as hitting a home button. 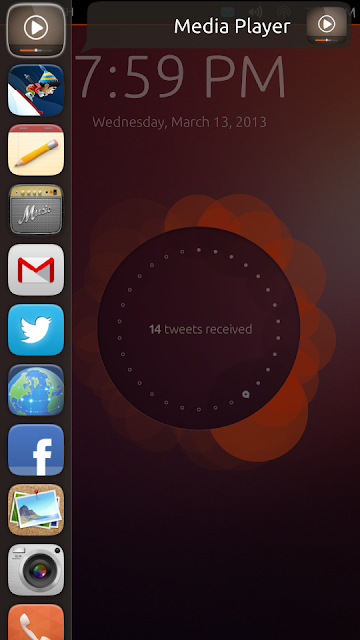 You can scroll upward through the bar if what you want isn’t immediately visible, although this task proves difficult one-handed. The bar is even available from the lockscreen, so you can still get to your camera quickly. 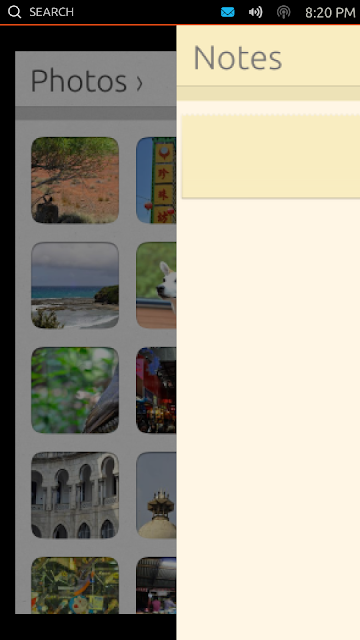 To crank your task switching speed up to cheetah (which is currently faster than SimCity can run), swiping from the right edge of the screen lets you switch directly between two apps. How many times have you thought to yourself ‘Aaargh! I wish I could get back to Angry Birds faster after feeding my dinosaurs in Jurassic Park Builder.’? Go ahead and insert apps that make you sound cooler if you want. Ubuntu touch has actually taken the classic alt-tab keyboard shortcut, and updated it to keyboard-less devices. 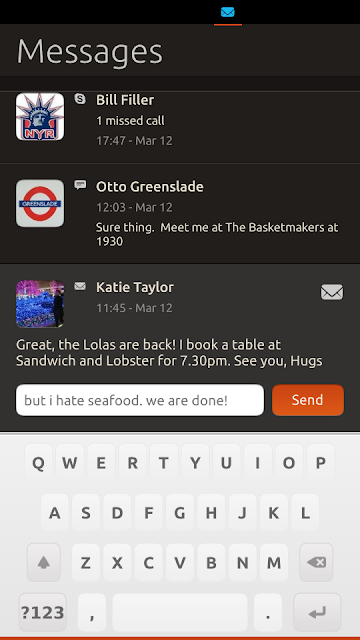 Swiping down from the top of the screen will show your notifications, which is nice and familiar for Android and iOS users. Tapping a notification brings up options, including Android-style quick replies to text messages. You have to tap on a notification and then tap on the icon for the associated app to make the notification go away, which is unintuitive and entirely too much work when you are actively trying to ignore something. You can also hit the Clear All button at the bottom, but I would still like an easier method for clearing individual notifications. 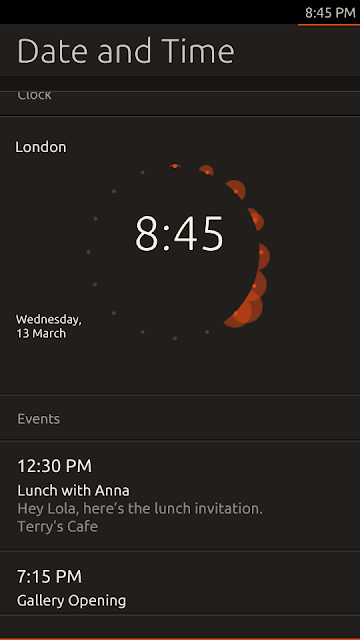 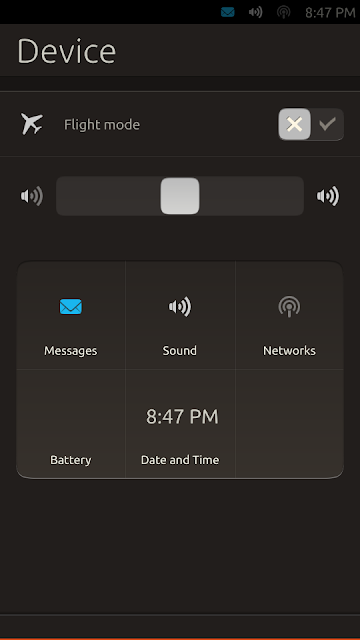 Tapping on the top bar instead of swiping brings up a quick settings menu, and also gives you buttons that take you to the other pull-down menus. At this time, these appear to be the only settings you can mess with. 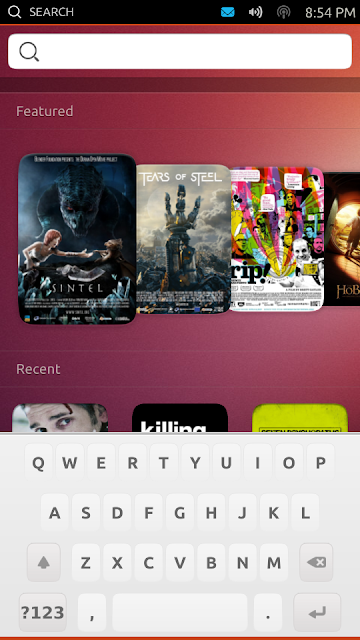 There is a search button on the top bar that only seems to do anything on the Music and Video panes of the homescreen, and, to me seems entirely redundant because of Ubuntu Touch’s final swipe direction. 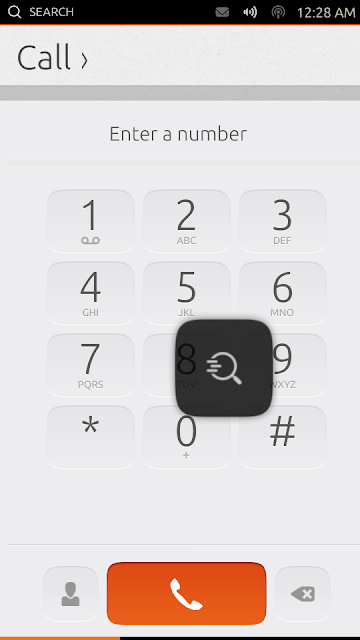 Swiping up from the bottom of the screen and releasing over the magnifying glass icon that pops up brings up the familiar Unity universal search function. Even though I am not connected to the internet, the search function seems to work well, providing instant results for even partial queries. 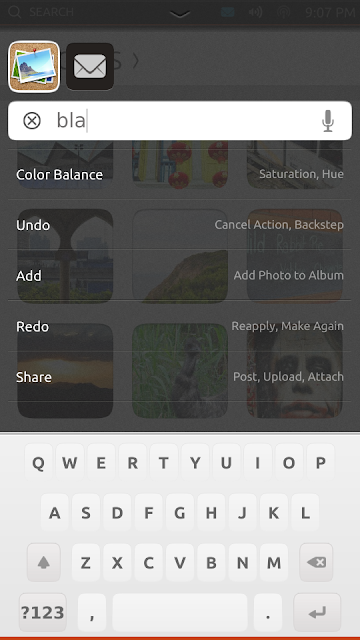 The upward swipe gesture also seems to serve a purpose similar to the menu key on an Android device, giving you context specific options for sharing or changing settings. Or at least that’s my guess. It doesn’t seem to be implemented everywhere, and sometimes if you swipe up from the bottom of the screen, but not all the way up to the search icon, you get a different set of options to choose from. 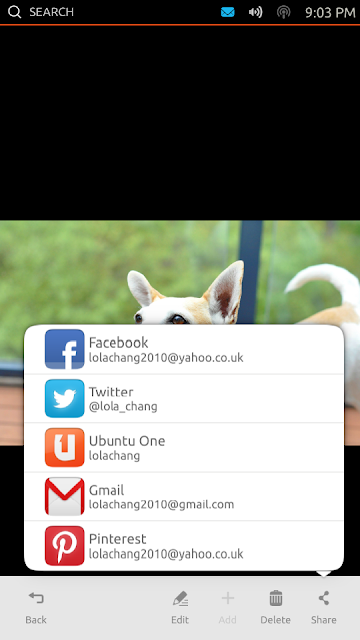 Other assorted musings about Ubuntu Touch

The search button on the top bar is redundant because of the upward swipe gesture.

Swiping up and from right to left doesn’t work on the home screen. Likewise, the Unity bar behaves slightly different when you are on the home screen. I don’t know if this is intentional or not, but if you are going to make an OS the relies on gestures, they need to work the same everywhere, or your UI will be confusing.

You can really see the benefit of running software natively instead of through Android’s Dalvik virtual machine. Even though I am running this early release on an unsupported device, swiping around is nearly as fast as navigating around in Android. I can’t wait to see a native ARM app that can make use of the extra horsepower.

The size of items on screen is very easily scalable via a single text file. I imagine Ubuntu Touch with giant buttons could be popular for smartphones marketed at seniors.

There is almost nothing still here from desktop Ubuntu. One of the best parts of Ubuntu is the ability to just apt-get install whatever you want. Especially on a tablet, I would want to want to have access to that software. Right now, there is no terminal and there is no apt. Is it really linux without a terminal?

Will they include Dalvik and provide a method for running Android apps, or will all apps need to be ported?

If there is still significant overlap with Android, and they don’t bring over very much from the desktop and server sides of Ubuntu, then wouldn’t it have been easier to just make a Unity skin/launcher for Android? Wouldn’t it be easier to just add some Ubuntu stuff to Android and let Google do all the heavy lifting?

What service will be selling the media that is featured on the Music and Video panes on the home screen? Based on their past partnership. I would guess Amazon. This has to be part of Canonical’s motivation to get into the mobile market in the first place. I just wonder what Google thinks of Canonical piggybacking off of their Android and Nexus efforts to get their mobile OS off the ground, considering they will be effectively stealing market share from the Play store. 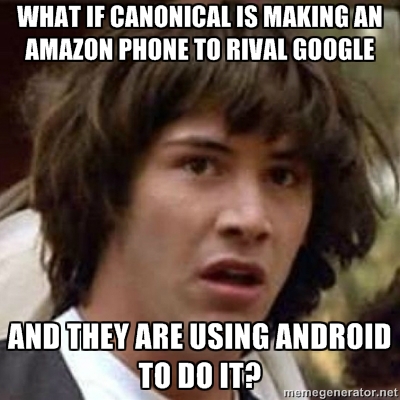 One thought on “Ubuntu Touch: first impressions and SCREENSHOTS!!!”